Future Islands has been bopping from music festival to music festival across the country, so it’s no surprise that the well-practiced alt-electronic band wound up being the first act of the entire festival. The Baltimore band gave audience members an out-of-body experience with Samuel Herring’s gruesome grunted lyrics and celestial sythpop beats that inspired junky dance moves. Hit single “Seasons (Waiting on You)” was just as crisp at the studio recording, if not packing an extra electronic thump – as was the rest of the synth wonderland of a set.

It’s somewhat bizarre to see an accordion on stage at an alternative music festival.

It’s even more bizarre to see multiple saws onstage, being used not as props, but as musical instruments. Bow in hand, Neutral Milk Hotel’s Julian Koster stole the show playing a saw for a Theremin-like sound, and spent the rest of the show pickin’ on a banjo or lugging around a bright red accordion to complement the band’s essential folk rock.  The group’s take on popular folk and Bob Dylan’s legendary style collided for sing-alongs and abundant odd titled songs (see: “Two-Headed Boy Parts 1 & 2” and the “King of Carrot Flowers Parts 1 & 2”).

An intro that layers “Riders on the Storm” over smoke and pixelated, nonsensical images on the Jumbotron?

Must be the National.

The Boston Calling veterans veiled the audience in a dreary trance – lead singer Matt Berninger himself clutched the microphone stand in a charmingly nonchalant stupor. “I don’t have the drugs to sort it out,” he murmured on the paranoid “Afraid of Everyone,” and carried out the daze carried during “Pink Rabbit,” a tune that seems to replicate the acid-trip effect of Jefferson Starship hit of the (nearly) same name. Berninger broke the spell with raw, bloodcurdling aggression on “Squalor Victoria” and “Sea of Love,” and changed the tempo of the set once more for the acoustic last track, “Vanderlyle.”

THE SHOW MUST GO ON – Saturday, September 6

It’s a painful cliché that journalism professors pray that their students never use in their work.

However, when Lorde says it, it’s an entirely different story.

“What you have done tonight is something pretty special, and it makes me feel pretty lucky,” she said mid-set to a crowd that had been evacuated from City Hall Plaza only a few hours earlier due to severe thunder storms.

The teen-indie-queen may have a reputation for dancing like an awkward skeleton on stage, but last evening she lost herself in strobe lights and distracted disgruntled concertgoers from the fact that Volcano Choir and Girl Talk would not take the stage that evening.

Saturday’s lineup started something like a day at the Electric Daisy Carnival – local electronic heroes St. Nothing and Clifflight blistered in the midday sun and belted out blissfully mellow synth beats to the diehards rockers that came in the afternoon. 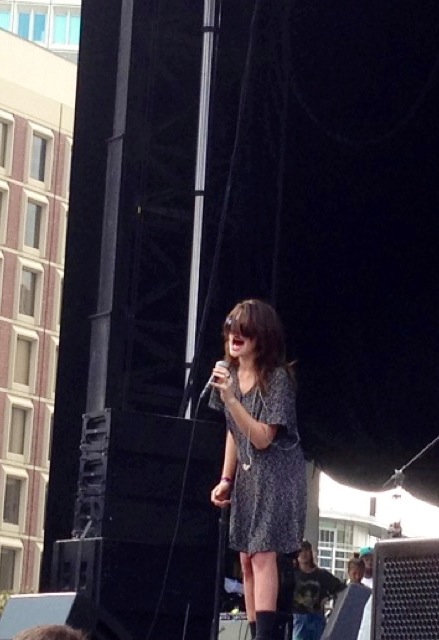 Bleachers put an end to all things mellow with fist-pumping upbeat indie songs, most notably, the optimistic “I Wanna Get Better” that Boston Calling itself used to entice potential attendees in this season’s promotional video.

Hard rockers the Hold Steady were the last group to play before the otherwise steamy day became overrun with storm clouds, and the crowd was forced to evacuate City Hall Plaza for safety reasons. It was another two hours before Boston Calling management declared that headliners Lorde and Childish Gambino would perform at 9pm and 10pm – and that indie group Volcano Choir and dance king Girl Talk had been stricken from the lineup.

Lorde and Childish Gambino were more than ready to pick up the slack. 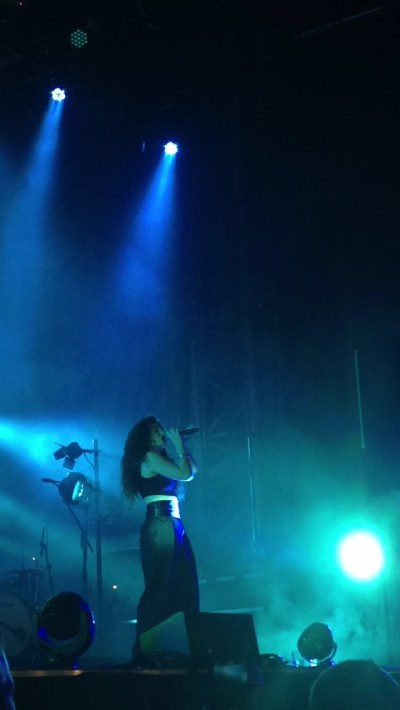 After the entire crowd had practically bowed down to worship the “Royals” singer, the audience immediately sprinted – no hyperbole – to the adjacent stage, where Childish Gambino performed nearly the second Lorde finished. Twitching audience members quickly became raving aude members, as Childish’s signature rapping easily replaced any dance tracks that Girl Talk was planning on playing.

“Should we do some old-school?” he asked, causing the crowd to erupt with screams.

Or perhaps the audience was cheering because Childish had just shed his trademark Hawaiian shirt.

It was, for the most part, a day dedicated to progressive rock.

Sunday’s Boston Calling lineup was dominated by face-melting guitar licks from The Replacements, Spoon, the 1975, White Denim, and the War on Drugs.

“Where the fuck have you been? I saw you at The Rat,” screamed one enthralled Replacements fan, referencing the old Boston music venue the Rathskellar, where punk tunes thrived decades ago.

The rowdy headliners appeased a crowd of voracious punks with 40 years of hits, and was the only artist of the festival to return for a encore.

British alt-rock gods The 1975 wooed ladies and enthusiastic hipsters alike while lead singer Matt Healy drank in the love of fans in between taking slugs of wine from the bottle he brought on stage with him.

“It’s a like a narcissistic playground,” he said as security guards handed him multiple fan-made portraits.

Spoon, the War on Drugs, and White Denim all delivered their own strains of head-bang-inducing progressive indie-rock, and Brooklyn kids San Fermin blasted baroque pop beats to early concertgoers after Gentleman Hall’s set.

Twenty-One Pilots were the stellar stuntmen of the day; between doing backflips off the piano and drumming on top of the crowd, the masked due cleverly combined rap and pop for a feisty set.

Wildcard of the evening was Boston jazz/soul band Lake Street Dive. Fronted by leading lady Rachael Price, the group’s set sounded like a cross between lounge jazz and bayou blues.

Headliner and iconic rapper Nas performed a soulful set with help from the Roots and Questlove, mashing up Nas’ lyrics with the Roots’ iconic neo soul rhythms.

– DJV of Rock This Way 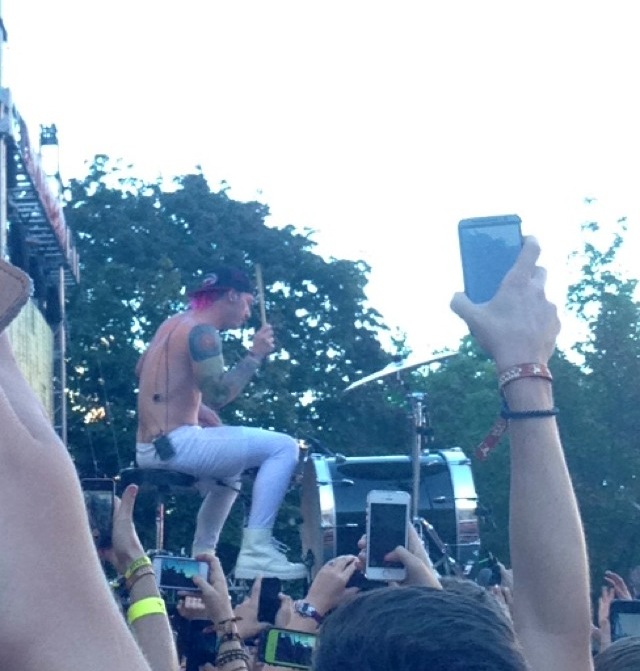